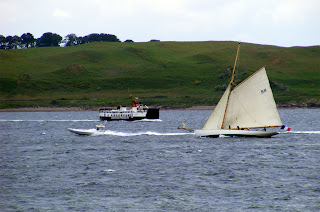 A potential "stramash in the penaly box" in the Largs Channel 17 June 2008, as Caledonian Macbrayne's Loch Riddon tries to avoid a Fife Yacht. I have know idea what the guy in the powerboat was up to, he circled the yacht causing potential mayhem in the strong sou'-wester!