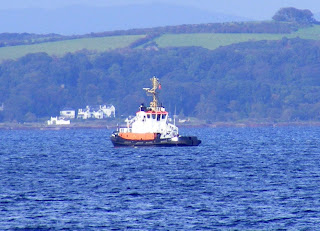 Tug Bugsier 21 (seen here at 11.00 29 September 2008) also later ran to JWD, although she was riding out the waves north of Great Cumbrae at 16.00 when everyone else ran for cover! Met Office forecast appears to have changed to reflect the abating winds (I hope). She is on station to handle the return of the barge which Carron took upriver earlier.